Paul and I visited a spinal doctor at Guy's hospital yesterday. We had been led to believe the worst after the last meeting. That he would have to undergo a very risky operation that, even when successful, would result in limited movement for good. While his neck break had healed at the back it had not done so at the front ( he had what is known as a Jefferson fracture, shearing the top vertebra entirely in two front to back ).
The spinal team had met and discussed his case a week ago.
Thankfully, they finally agreed that, while there is only partial healing at the front right of the vertebra, the healed back and the strength of the surrounding ligaments suggest that it would be better to avoid the trauma of surgery and, gradually, with physio, wean him out of the collar.
His age, the risk of stroke and infection, are too strong.
While this is not a complete reprieve, there remain risks and concerns and should he begin to have pain or numbness they will need to look at him again, it does feel like a weight lifted, a brighter avenue.
I cannot express how grateful I am.
He has been very, very lucky.

One thing it has made us do...a long time ago here I wrote that we were going to get a civil partnership. We never got around to it. We are doing so now.

We travel down to Brighton today as we must spend 7 days in the town prior to the initial registration.The ceremony will take place on December 13th. A Saturday. I wish it could have been Friday 13th but at least I get my favourite number.
No fuss, no big do.
A number of people have asked why we are not getting married. While I am glad there is the opportunity for those gay men and women who wish to to do so my personal take on it is that the last thing I want to do is mimic an outmoded and overrated heterosexual tradition.
Besides, Paul just thinks it would be 'too poncey'.

I have, in the past, imagined putting together a good party. A mate is 'Black Elvis' and he would sing a few songs. I know a couple of DJs with very different sets. I know a great swing band. I even know the perfect venue.

But, add it all up and you're into the thousands very quickly.
I'd rather spend it on a new shower in the cottage for Paul. I'll have to say goodbye to my beloved claw foot tub but it will be 'adding value' as they say.

But whatever we do and however we do it I am immensely thankful for the opportunity to do so.

I always wake each day and quietly say thank you for my life. Hippy shit I know but genuine. However, these past few months there has been an unwanted shadow of worry always just behind everything.
It is why I stopped posting here until we had seen the specialist.
That I feel I can start posting again is just one example of things can now move on.
It feels like exhaling, slowly and with great relief.

This dingy,grey,overcast day could not feel any sweeter.

Ra and I just made up a new cocktail.

In a highball glass, y'all.

Bear in mind we are working on this right now.
Needs something.
Mint...and other shit.
But, we are on it and, trust me, tastes good.

And feels good too.


Sat at the bar, two old men, three faggots and one member of a notorious motorcycle club.

I came across this on a Tumblr blog I follow.

Anything anyone can do, any amount no matter how small will help. As you can see, she is in a bad way. Her foot was caught in an animal trap and may have to be amputated.

I haven't posted in a long while. This has bugger all to do with Facebook or any other digital nonsense. Truth is I cut my online anything down pretty radically. Initially, losing internet connection for two weeks and so going essentially cold turkey just weaned me away from habit that had come to frame my days rather too much. However, we have also been dealing with the fallout from Paul's broken neck and hip and that became my main priority.
I didn't feel it appropriate or actually that interesting for people to read about regularly. To be honest, posting would encourage too much introspection at a time when it was not needed.

The hip is healing well. He is back walking with a stick. However, the neck not so good. Saw the specialist today and the bone has not fused entirely. The collar remains on. It is quite possible that he should have been far more immobilised, with the use of a Halo frame screwed into his skull, from the outset, as the smallest of movement to turn negates the fusing. This is coupled with osteoporosis. However, nothing good will come out of dwelling on what perhaps should have been done.

Paul is a tough nut and will not show upset. But I saw the hurt and disappointment in his eyes. It is a blow.
He is in no pain. Yes, that's a good thing. But some pain would stop him from making unconscious movements.
The other concern is he has developed a problem with his balance and you kind of don't want that when a fall could result in more than a bruise and a bump.
Suffice to say, our lives have narrowed accordingly and my days are pretty busy just doing most of the stuff that needs to be done.

We were meant to have moved wholesale to Brighton by now but that is delayed until early next year so that he can visit the hospital here. After 6 months we are still struggling with getting the blasted housing association to pass the tenancy over to him. Last week we discovered they had not even passed Donald's death certificate from one department to another. We gave them the death certificate in May. Because the tenancy listed Donald as primary tenant the tenancy number referred to him. Paul needs a new tenancy number but, while recognised as an occupant, is not yet seen as a tenant. So, the rent he has paid, that has left his account...they have 'mislaid'.

My wish for one last Xmas in London has been granted but the reason why and the endless bureaucratic absurdities with hospitals and housing associations make it bittersweet.

I actually just want us down by the coast, in the home I bought for us, finally getting the blasted civil partnership done ( in my will Paul inherits the house...but would have to sell it to cover inheritance tax. I want to know he has a roof over his head if I'm not around. ) and just building a life and routine that feels more than treading water.
For Paul the move to Brighton will allow him a better lifestyle than he has here. The size of the town and the very real support and friendship of the people around us will make his days better. And that is really the priority.
Our friends here are spread too far across London and are too busy with their own lives, with jobs and with kids.

Well, most of them. Ironically I have become matier with the two good people who made my suit and from there much pleasure and goodness has arisen. And some opportunities besides...

Now, time to run a hot bath, get in and soak. Then I am for an early night with a wonderful book given to me by my good and cherished friend from SF. In spite of everything...limitations, obstacles, changes and craziness in both our lives, we have managed a couple of meets. Not as long as we would have hoped but just as rich and passionate as ever.

The book is 'The Year of the Hare' by Arto Paasilinna.
Short, dry, funny, moving.
I recommend it to anyone who loves life. 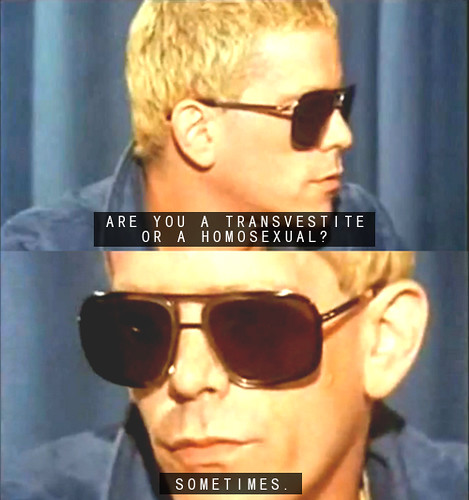 My Internet returned for two days. It is down again. I am so fed up with people from BT telling me they are escalating my case. Bullshit jargon, bullshit service. This week has been a mirror of last. Everyone pleasant but ineffectual. No one capable or willing to say what he problem actually was, is or might be. My case has been escalated so much I now have a direct number for their special team in Lincoln who deal with only the really stubborn problems. No call centres in India for me anymore.
But still no service either.

If we weren't planning on moving away I would switch to another provider. As I did in Brighton.

Meanwhile another senior BT executive retires with a bonus that would keep a small country's economy afloat.

There is an old English expression for this.

See you around sometime.

...because when I was a youngster I saw something like this.
In my uncle Jack's pub. The pub sat opposite the pit, on the crossroads, at one end of a one street town. It was a treat to sit with a lemonade and listen to the banter of the men who had spent a day far beneath the ground. It was there I saw my first tattoos. I like the faded, old blue scratchy ones. Paul has a faded blue bird on either hand. When we met it was like he was wearing white tie. 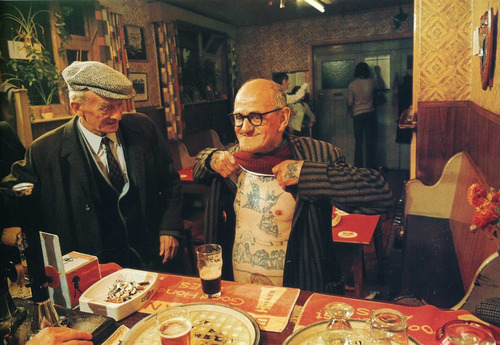 Whenever people express (idiotic) concern about 'how it will look when you are old' I always think of old blokes like the ones I watched in my uncle's pub and like this gent in the photo.

They will look just fine. 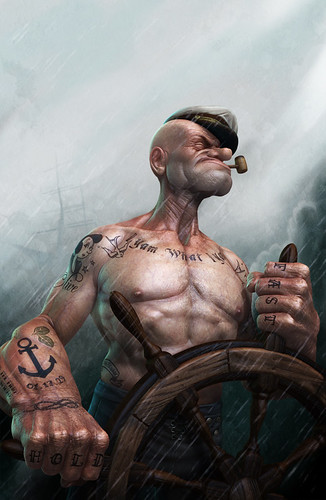 So my friend is out of hospital. We spoke last night. He sounds terrible. No strength in his voice. Actually sounded almost like another person. An elderly, weak and beaten one. But his attitude is good. Or at least, he gives the impression of that when we speak and through his emails. That said, it is only two weeks today since he had a major operation. Early days. There was also the chance that he would leave hospital with a physical impediment that would severely compromise his quality of life. This, thankfully, has not happened and for that we must be immensely grateful. It is far too early to know how this will affect 'us' - when and how we see each other, his confidence and desire to travel.
Whatever - we will deal with it.
As I write those sentences the Coach House next door, setting up for a wedding, is playing 'Quiet Life' by Japan. One of my very favourite songs and one whose lyrics resonate now.

I have seen before hat when people are at a certain age they can get knocked back by something like this and it can be hat that makes them...elderly. Something he has never been. He has always been very proud of his fitness and physicality. Undoubtedly he will do all to regain that. But sometimes the body will no longer allow.

Either way, I need to step up to the plate that bit more.

That reminds me - I promised I would send him a load of Kate Bush...

Pacific Rim.
When many members of the movie going public collectively tongue the swollen, fat arse of Hollywood.
Collapse